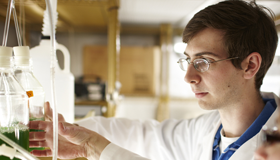 The government has published its long awaited science and innovation strategy, but many of the questions asked by the science community won’t be answered until the next spending review. The strategy re-iterated capital spending plans set out in the autumn statement, but does not commit to ringfencing the science budget or to increase R&D expenditure in line with competitors.

The government said it recognised that the science base needs ‘adequate resource funding’ not just capital investment, and that R&D spending by departments needed to be prioritised – both of which would be considered in 2015.

Sarah Main, director of the Campaign for Science & Engineering, said the strategy could have been ‘wide-ranging and visionary’ but added that it reflected ‘the reality of where we are in the political cycle’. She said there was much to welcome, but a lot depended on whether it was ‘picked up by the next government or left to gather dust’. Dominic Tildesley, president of the Royal Society of Chemistry, said: ‘To reverse the decades-long decline in UK science funding and create jobs in our knowledge economy, we need politicians now and beyond the next election to grow funding for both facilities and staff. Setting the UK on a trajectory to return government science spend to the EU average of 0.7% of GDP by 2020 would attract private sector R&D investment and boost UK growth.’

The strategy puts emphasis on science, technology, engineering and maths (STEM) skills: £67 million is earmarked to train up to 17,500 more STEM teachers over the next parliament and recruit another 2500 specialist maths and physics teachers. More apprenticeships will be delivered by creating national colleges in digital skills, wind energy and advanced manufacturing, with a £5 million pot to support the best candidates. The government said it expected further and higher education to take more account of STEM skills shortages.

It also wants to create another two catapults next year: energy systems and precision medicine, to add to the existing network. How much funding, or where these will be is not specified. There’s also a £30 million commitment for UK involvement in the European x-ray free electron laser project being built near Hamburg, Germany, and £20 million to create an Inspiring Science Capital Fund, to encourage public engagement in science.

A raft of reviews are to be carried out, including efficiencies in universities and making sure that the research councils are investing public money wisely. There’s recognition of the increasingly competitive environment for R&D too, which will mean that the country will need to compete to attract investment and skills, but also build on relationships with new scientific powers like China and South Africa.