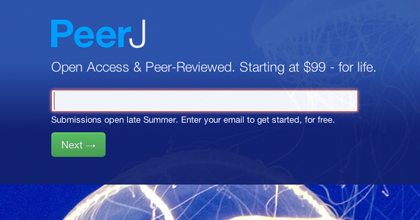 PeerJ Inc. (http://peerj.com), a new Open Access academic publishing company, formally announced itself today. Founded by seasoned academic publishing and technology professionals from PLoS ONE and Mendeley, PeerJ will publish a broad based, rapid, peer-reviewed journal (‘PeerJ’) and an innovative preprint server (‘PeerJ PrePrints’). PeerJ will open for submissions in Summer 2012, and will publish its first articles in December 2012.

“PeerJ significantly moves the needle towards universal Open Access publishing for all academics,” stated Peter Binfield, Co-Founder and Publisher of PeerJ. “We provide authors with publication at an affordable price, starting at just $99 for life; an inclusive venue in which to publish their peer reviewed research; and an innovative and dynamic approach towards academic publishing in the internet era.”

PeerJ will publish all well reported, scientifically sound research in the Biological and Medical Sciences. The journal will operate a rigorous peer review process and will deliver the highest standards in everything it does. “We have an attractive model that authors will appreciate; a great team who know what needs to be done; and the unique opportunity to take Academic Publishing to a new level. PeerJ is 100% committed to improving the academic publishing process for both authors and readers” said Binfield.

Jason Hoyt, Co-Founder and CEO, explained that “PeerJ will innovate in everything it does and will set new standards for both the publishing experience and the dissemination of research. We will go beyond publishing by building tools to be open sourced back to the academics who make PeerJ possible, as well as to interested developers. We will continue to innovate and experiment around the open access model, and we will strive to deliver an outstanding service to our authors.”

Unique among academic publishers, PeerJ provides authors with low cost lifetime memberships giving them the rights to publish their papers freely thereafter. Three membership plans exist – Basic, Enhanced and Investigator.  All member plans confer lifetime rights, and the three tiers allow members to publish once, twice, or an unlimited number of times per year in PeerJ.  Each author on a paper must be a member and the Basic membership plan is just $99. To celebrate the launch, PeerJ is offering discounts of $30 off the Enhanced membership and $40 off the Investigator membership until September 1, 2012 (see:http://peerj.com/pricing/).

Funding for PeerJ has come from a partnership between O’Reilly AlphaTech Ventures (OATV) and O’Reilly Media – as such, Tim O’Reilly, founder of O’Reilly Media and an Open Source leader, will join the governing Board of PeerJ. Tim was instrumental in helping to block the passage of the 2012 RWA bill in the U.S. Congress (which would have negatively affected open access to academic content in the US) and is a passionate advocate for open, unfettered communication in academia. Co-founders Binfield and Hoyt are excited to have his involvement and Tim had this to say about PeerJ:  “It’s easy to forget that technological revolutions also demand business model revolutions. Open access is transformative for science publishing, not only because it spreads knowledge more efficiently, but because it slashes the cost of producing and consuming that knowledge.”

Early comments from thought leaders in the field have included the following:

“It’s exciting to see a new entrant to the Open Access publishing scene with a truly innovative business model – the flexibility of payment options that PeerJ offers to authors should encourage more researchers to choose to make their articles openly available.”
Heather Joseph, Executive Director, SPARC (The Scholarly Publishing and Academic Resources Coalition)

“PeerJ is more than just an innovative publishing initiative. It pulls scientific publishing back from the career-advancing service it has primarily become, restoring its origins: scholarly communication. It covers all the bases: from informal initial public exposure via preprints, via formal peer-reviewed publishing, to post publication commenting and versioning tools. All fully open, of course, and usable by people as well as computers. It has the makings to put the ‘community’ back into ‘communication’. PeerJ significantly lowers any financial barriers in the process as well, and avoids the undesirable side-effects and perverse incentives of loading the costs on accepted formal publications alone, which is what we see in current scientific publishing. I have no doubts about its success.”
Jan Velterop, Open Access pioneer

“Scholarly communication is changing, and the PeerJ business model is an interesting one that may accelerate that change and therefore deserves attention. Pete Binfield changed publishing at PLoS and is poised to do so again with PeerJ.”
Phil Bourne, Professor of Pharmacology, UCSD. Co-director of the Protein Data Bank; recipient of the Jim Gray e-Science award; and recipient of the Benjamin Franklin Award.

“Clearly PeerJ is taking the open access publication model further than it has ever gone before. I’m impressed at the planning and thought in the PeerJ model, in the founding team, and in the possibilities promised by the company.”
John Wilbanks, Senior Fellow in Entrepreneurship at the ‘Ewing Marion Kauffman Foundation’ (the world’s largest foundation dedicated to entrepreneurship); Founder of ‘Consent to Research’ and until 2011, the Head of Science at Creative Commons.

_______________________
About PeerJ: PeerJ is a privately held Open Access publisher of scholarly scientific content, which offers researchers a lifetime membership, for a single low price, giving them the ability to publish all future articles for free. The company has two publications – a peer-reviewed journal named  “PeerJ” and a preprint server called “PeerJ PrePrints”. PeerJ is based in San Francisco, CA and London, UK.

About OATV: O’Reilly AlphaTech Ventures (OATV) is a seed stage venture capital fund located in San Francisco, CA. OATV is in the business of funding disruptors, innovators and hackers of the status quo. OATV takes a cash efficient approach to seeding and growing businesses which creates a natural alignment with the entrepreneurs it funds. In addition to capital, OATV brings a depth of operational experience and industry relationships to amplify the efforts of its portfolio companies.

About O’Reilly Media: O’Reilly Media spreads the knowledge of innovators through its books, online services, magazines, and conferences. Since 1978, O’Reilly Media has been a chronicler and catalyst of cutting-edge development, homing in on the technology trends that really matter and spurring their adoption by amplifying “faint signals” from the alpha geeks who are creating the future. An active participant in the technology community, the company has a long history of advocacy, meme-making, and evangelism.

About Open Access: Open Access is the practice of providing unrestricted, free, online access to peer-reviewed scholarly content (typically journal articles). Copyright is retained by the authors, and a Creative Commons ‘attribution license’ is commonly applied, meaning that anyone can re-use the material provided they attribute the original source.

For more information, or to schedule interviews, email press@peerj.com