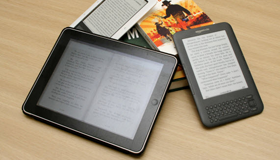 Nine in ten of today’s elementary, middle and high school students believe that mobile devices will change the way students learn in the future (92 percent) and make learning more fun (90 percent), according to a new study conducted by Harris Interactive and released today by Pearson. The majority (69 percent) of elementary, middle and high school students would like to use mobile devices more in the classroom.

The survey was conducted online by Harris Interactive on behalf of Pearson between January 28 and February 24, 2013 among 2,350 U.S. students, including 500 elementary school (4th-5th grade) students, 750 middle school (6th-8th grade) students, and 1,100 high school (9th – 12th grade) students. The survey also included a national sample of 1,206 college students. The survey of elementary, middle and high school students finds that more than one-third of 4th and 5th graders (36 percent), and a third of middle school students (34 percent), currently owns a tablet. Hispanic students are more likely to own a tablet than non-Hispanics (36 percent Hispanic vs. 30 percent white and 28 percent black).  Black (51 percent) and Hispanic (49 percent) students are more likely to own a smartphone than white students (40 percent). Twenty-five percent of all students intend to purchase a tablet within the next six months. Forty-three percent of students own a smartphone, with older students more likely than younger students to own one (56 percent high school, 42 percent middle school, and 19 elementary).

“This year’s study findings provide guidance to schools and districts around the country as they plan to integrate mobile technology into teaching and learning,” said Seth Reichlin, Ph.D., Pearson’s Senior Vice President of Market Research. “”Since the majority of students want to use mobile devices in the classroom, and because so many now own mobile devices, BYOD (bring your own device) programs and the challenge of universal access will remain a compelling topic of discussion for education leaders.”

“It is particularly interesting to note that as students rise to higher levels in their education the way that they rely on mobile devices to support learning changes as well,” said Shawn Mahoney, Vice President, Product Design Research and Evaluation, Assessment & Instruction, at Pearson. “While smartphones and tablets are still important tools for high school students, it appears that they are looking for more full featured productivity devices, such as laptops, to support their learning activities.”

This survey was conducted online within the United States by Harris Interactive on behalf of Pearson between January 28 and February 24, 2013 among 2,350 students, with 500 elementary school (4th-5thgrade) students, 750 middle school (6th-8th grade) students, and 1,100 high school (9th – 12th grade) students. Qualified students were 8-18 year old U.S. residents who were enrolled in 4th through 12thgrades. This survey was part of a larger study on 4th through 12th graders, including oversamples in Florida, Texas, California, and New York. The survey also included a national sample of 1,206 college students.  Data were weighted to be representative of the 4th grade through college population in the U.S. Figures for age, sex, race/ethnicity, household income (for college students), and highest level of parental education (used as a proxy for household income for 4th through 12th graders) were weighted where necessary to bring them into line with their actual proportions in the population. All sample surveys and polls, whether or not they use probability sampling, are subject to multiple sources of error which are most often not possible to quantify or estimate, including sampling error, coverage error, error associated with non-response, error associated with question wording and response options, and post-survey weighting and adjustments. Therefore, Harris Interactive avoids the words “margin of error” as they are misleading. All that can be calculated are different possible sampling errors with different probabilities for pure, unweighted, random samples with 100 percent response rates. These are only theoretical because no published polls come close to this ideal. Pearson will make the full methodology, including weighing variables available upon request.