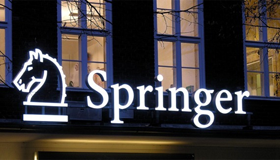 Shares of Springer Science, controlled by Swedish buyout firm EQT Partners AB, are set to start trading in Frankfurt before the summer break, according to a statement today. Goldman Sachs Group Inc. and JPMorgan Chase & Co. are managing the sale.

German companies including forklift-maker Kion Group GmbH and the country’s largest residential landlord Deutsche Annington Immobilien AG are planning to list shares as their owners seek to tap a rally in equity markets, with the benchmark DAX Index (DAX) gaining over a third in the last 12 months.

EQT is still accepting takeover offers for Springer Science this month and may scrap the IPO, people familiar with the matter said last week. The buyout firm hasn’t made a final decision whether to do the IPO or sell the German publisher, according to the people. Buyout firms BC Partners Ltd., which is most interested, as well as KKR & Co. and Providence Equity Partners have until about June 10 to hand in takeover offers, the people said at the time.

If the IPO happens, about 760 million euros in new shares will be issued. Springer Science reported adjusted earnings before interest, taxes, depreciation and amortization of 343.7 million euros in 2012, the company said.

The company reported adjusted earnings before interest, tax, depreciation and amortization of 344 million euros last year, up 12.4 percent from 306 million euros of adjusted Ebitda in 2011.