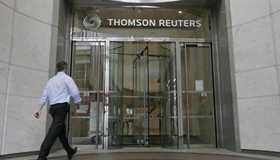 The IP & Science business of Thomson Reuters, the world’s leading provider of intelligent information for businesses and professionals, today announced revisions to its Highly Cited Researchers (HCR) methodology to refine its processes for identifying the world’s most highly-cited authors and institutions.  Thomson Reuters gathered industry input and updated its methodology while the release of any new designations were frozen, to ensure the greatest level of accuracy in its list. The next announcement of the most esteemed researchers will be published in April 2013, and will be included as one of the indicators used for Shanghai Jiao Tong University’s 2013 Academic Ranking of World Universities.

“Being identified by Thomson Reuters as one of the world’s most highly cited researchers has long been a coveted designation for those who receive it,” said Gordon Macomber, managing director, Thomson Reuters Scientific & Scholarly Research. “We take the development of this list very seriously, which is why we had a temporary hiatus of its publication in order to engage with the community to define a methodology that is robust and transparent. I’m pleased to announce that we will once again be issuing the list of the world’s most highly cited researchers this year, and that it will be used in the 2013 Academic Ranking of World Universities by our valued partner Shanghai Jiao Tong University.”

An HCR designation opens new opportunities for those who hold it. Authors/Researchers are immediately identified as being among the world’s best in their field, as are the institutions which employ them. This, in turn, impacts the recruitment and enrollment of faculty and students, respectively.

The updated Thomson Reuters methodology begins first with an analysis of the most highly cited papers, and is followed by a review of those individuals who have authored or co-authored the greatest number of these documents.  The analysis now covers a 10-year moving window, with citations counted over an additional year, so every paper is available for citation for at least 12 months. Articles and reviews from the Web of ScienceSM are the primary documents analyzed. Once someone is recognized as being highly cited by Thomson Reuters, he/she will retain that designation through the future, regardless of changes to citation influence in future years.

“It is an honor to work with Thomson Reuters and make use of its carefully processed list of the world’s most highly cited researchers,” said Dr. Ying Cheng, executive director, Center for World-Class Universities at Shanghai Jiao Tong University. “We take great pride in our Academic Ranking of World Universities and the value it provides the market. Partnering with Thomson Reuters to ensure the highest quality data is a key feature of our ranking.”

Authors/Researchers may review and update their information for consideration in the 2013 most highly cited list by March 31, 2013.