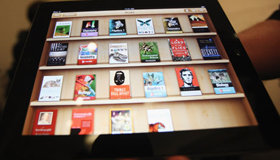 Simba Information has published an addendum to its recently released Trade E-Book Publishing 2012 report. In addition to showing an updated list of e-book hardware trends, the data indicates that about 24.5% of U.S. adults consider themselves to be e-book users, up from about 17.2% the year before; the sudden rise may be due to consumers buying the runaway bestselling series 50 Shades of Gray.

“Even though the base of e-book users expanded over the past year there are still lingering questions as to what extent consumers are engaged with digital book content,” said Michael Norris, senior analyst of Simba Information’s Trade Books Group, in commenting on the findings. “We also found that over a quarter of e-book users haven’t purchased a single digital book in the past year, and that is about the same as we discovered last summer. Additionally, there remains a very large group of iPad owners who are not e-book users at all.”

The entire addendum, which is based on data collected from Simba’s nationally representative consumer survey conducted in July and August 2012, will be distributed, free of charge, to purchasers of Trade E-Book Publishing 2012. This report also provides an analysis of how much money e-book users spend on digital titles and a full psychographic analysis that profiles e-book user habits. Devices profiled in this edition, as well as in the addendum, include Barnes & Noble’s Nook line, smartphones (including the iPhone), Amazon’s Kindle devices, Apple’s iPad and more.

The report also tracks the demographics of book buyers by gender, age, household income, education level and more—and provides extra value by showing demographic details of all e-book users and singling out those who have received free e-books in the past 12 months. It can be found at: http://www.simbainformation.com/redirect.asp?progid=84048&productid=6885450