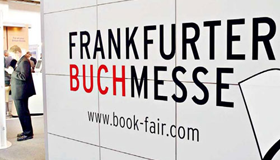 The Frankfurt Book Fair closed on Sunday, having achieved a slight (0,6 percent) increase in total visitor numbers compared to 2011, with a total of 281,753 visitors. The fact that the number of visitors on the trade visitor days declined only marginally (by 1.6 per cent) shows that the industry remains optimistic and is well equipped to face its challenges. As Juergen Boos, Director of the Frankfurt Book Fair, remarked, “Here at the Frankfurt Book Fair we witnessed the courage and innovative power of Europe, and of the international publishing industry. Despite the economic crisis in Southern Europe, all the important representatives of international and European publishing were here in Frankfurt. And the amount of interest shown in translations from the so-called smaller language areas, and in digital projects continues to grow.” This was also evident from the increased significance of the rights trade, which has now become highly complex. The Literary Agents & Scouts Centre in Hall 6.0 grew by 4.4 per cent, compared to 2011. Around 100 agents more than last year held their appointments in the proverbial 30-minute tact, which adds up to an additional 1,300 meetings every day.

“You might find it hard to believe,” said Dr. Gottfried Honnefelder, Chairman of the German Publishers & Booksellers Association, “but the more globalised the book business becomes, the more strongly people feel a need to meet each other in person at least once a year – and above all in Frankfurt. Live conversations about people and books are irreplaceable.” The presence of international publishers in Frankfurt is growing, and industry observers judged the mood among the publishers as more open and adventurous than it was a year ago. “Here in Frankfurt, modern publishing presented itself,” said Juergen Boos. “We’re experiencing the new generation of book people – rich in ideas, equipped with new competencies and highly networked. An entirely new spirit of achievement has taken hold.” This also includes the integration of new players from the fields of technology, film and games into the Book Fair universe; and it means the relationship between publishers and readers is becoming ever closer. With roughly 1,000 visitors, the StoryDrive Festival made it clear that questions of digitisation, creativity and innovation are no longer just matters for the industry specialists.

Also collecting excellent feedback was the programme of the Frankfurt Academy, whose 3,300 professional participants used the Frankfurt Book Fair as a way of meeting important players from the book industry as part of an international knowledge network; they identified new business models and trends, witnessed international examples of best practice, and exchanged their ideas.

The uncontested highlight of the Book Fair was the presentation by the Guest of Honour New Zealand, which won the admiration of trade visitors and general public alike with its charming understatement, its magnificently designed pavilion and its colourful mix of performance, dance, singing, multimedia and high literature.