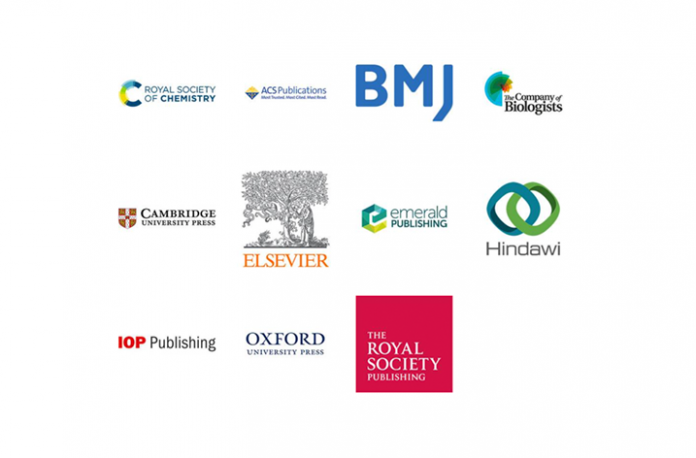 We have gathered publishers of more than 4,400 scholarly journals and tens of thousands of books in a landmark commitment to reduce bias.

Publishers responsible for tens of thousands of peer-reviewed journals and books have signed an agreement with us to take a proactive stance against bias, as we commit to working together to better reflect the diversity of our communities and to remove barriers for under-represented groups.

The 11 publishers have portfolios ranging across disciplines including STEM and medicine to the humanities and social sciences.

We have also been engaging with further publishers to form a working group to collaborate on further actions to improve inclusion and diversity in publishing.

Agreement on the joint declaration was reached in a workshop we organised, after we shared our pioneering Framework for Action in Scientific Publishing – an action-focussed “roadmap” to minimise exclusion and bias in our publications, also released publicly on Monday of this week.

Director of Publishing Dr Emma Wilson said: “Biases exist in research publishing, and acknowledging this is an important step for the research community at large. Working in silos and individually committing to scrutinise our processes will only get us so far – it is the agreement to collectively address these issues which we believe is key in levelling the playing field across research publishing.

“Today we are agreeing to pool knowledge, data and resources to understand who is in our communities, and we are committing to ensure this diversity is reflected in those who make decisions during the publishing process. We are establishing a working group to help us establish minimum standards across the industry, and invite all publishers who have not yet joined us to get in touch so we can learn from each other and change publishing together.”

Our previous research Is publishing in the chemical sciences gender biased? has shown that the gender of a scientific author, peer-reviewer or editor can influence the likelihood of a scientist’s research being published.

Nobel laureate and honorary fellow Professor Frances Arnold praised our leadership, saying: “It makes absolutely no sense to limit the possibilities of all members of society. Everyone should have a chance to contribute what they’re able to contribute. Chemistry has benefited enormously from diverse ways of thinking. It’s such a central science – it’s so full of possibilities for innovation that we would be foolish to limit who can do chemistry.

“The Royal Society of Chemistry has an enormous voice through conferences, through publications and through the people who are members. If we – the Royal Society of Chemistry – don’t lead this, who will? We can lead in inclusivity and we can lead by example – by making our own communities inclusive and welcoming, we can help to bring this idea to the larger population.”

All signatories of the commitment agreed to pool their resources and knowledge to agree four initial actions to set a new standard in scholarly publishing, including collaborating on self-reported diversity data collection and uncovering subject-specific baselines so targets can be set to achieve appropriate and inclusive representation of authors, reviewers and editorial decision-makers.